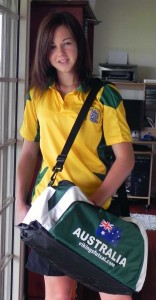 From the Vikings National Futsal Titles held this January 2011, Jessica Milano had the honour of being selected to represent Australia, for the 15 year Girls Team, in the United Kingdom “Tour Of a Lifetime”, from 13th – 31st October 2011.

Jessica had an absolute great time, and tells “I loved the travelling, on the flight over and back we stopped over at Dubai airport it was huge and just amazing, there was so much to see just at the terminal.”

“The tour itself was tops, we got to visit King Arthurs Labyrith, the Castles, the Beatles Museum in Liverpool, the York dungeons, London Eye, Parliament House, Big Ben and Buckingham palace, the shopping was pretty good too, I would have loved more time at the Nike outlet. All the stadiums we played at and visited were outstanding, we went to games at the home grounds of Manchester City and Stoke City and visited Manchester United and Liverpool’s stadiums too.”

“The Training was great we were coached by John Owens from Liverpool FC, Manchester City Academy Coaches, Greg Strong Academy Coach from Bolton Wanderers, I thought the Everton coaches were the best. They were really good at showing us different ways of creating space, in addition to improving our skills, like turning on the ball.” I learned heaps.

“We played in 4 Futsal Tournaments and only lost one game, we also played Football (Soccer) games, the Girls played 8 aside, we only lost one of those games also. The kids over there were pretty good, after all the UK is Football, it is their main sport. So the Girls did Ok and we learned a lot from their players too.”

“We had a really good tour group, I made heaps of new friends with kids (adults too) who I wouldn’t normally have got to meet as they come from all over the country, we definitely had plenty of fun travelling around together for three weeks.” When asked if she would recommend this to anyone else who is fortunate enough to be selected the answer was a definite “YES” “Sport, Travelling and Touring is a great combination”. Jessica said.

Jessica would like to thank the Fassifern Old Boys, the Lions Club of Boonah, the QCWA Boonah Branch for their generous sponsorship. A Big thanks to Winston Hall of Mantra Group and Breakfree for donating 2 Night’s accommodation – 4 People, 2 Bedroom Deluxe Apartment, Break Free French Quarter, Noosa Heads, for Jessica to raffle. Thank you to Maureen Maynard and Quota Club of Boonah and Boonah Futsal for their support. Thank you to all who bought tickets to support Jessica, Congratulations to the winner Shaarn Eldridge.